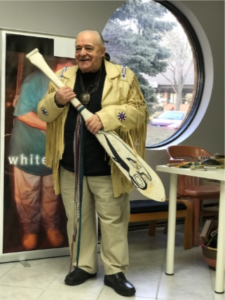 Doug is a spiritual counselor and consultant, dowser, international speaker, seasoned storyteller, and shamanic teacher of the Sacred Medicine. Born in Atlantic Canada of a Mkmaq mother, Doug reconnected with his native roots while serving as an Anglican Minister in Canada’s North.  He was mentored by a traditional native elder, (Mushum), who introduced him to embracing his First Nations heritage. Doug presents regularly to the American and Canadian Societies o

f Dowsers, both of which honoured him with lifetime memberships. He has also presented to the International Association of Facilitators and presents frequently to teachers’ organizations, community groups and elementary, secondary and university students. In 2010 White Eagle and his wife, Fran  (Turtle Mother), traveled throughout Asia performing healing ceremonies to bring balance to the earth.

Doug is a native non-denominational ordained minister. As well as performing ministerial functions, he teaches native culture and spirituality in a variety of workshop settings. Doug’s main focus is following the spiritual laws of the shamanic ways as a guide to manifest abundance in life.

White Eagle extends his traditional paddle to invite you on a journey on the Sacred Medicine Wheel of Life. Learn about your place on the Wheel to find balance and peace.