Canadian Society of Dowsers
Dowser of the Year 2010 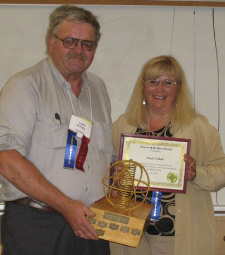 I would like to thank (or blame) my father for my introduction to the phenomonen called dowsing.  My family has always lived in a rural setting (6 generations in the same house on the same farm) and in this setting dowsing was always an accepted way of life. My father quite often received requests from neighbours to locate a new well site forgotten location of a drainage tile or even to do pregnancy checks on cattle all of which I watched and accepted as normal.  I was told also that his father (my grandfather who died before I came on the scene ) was the local dowser before him. As I grew older we would go on these missions together and check each others accuracy.  After high school I attended the University of Ottawa to study electrical engineering where I saw some co-relation to my father’s craft and current science even though nobody wanted to admit it. This sparked an interest  in radionics  (mechanical dowsing) and explained a lot of the ancient form of dowsing (radioestics).

My first experience with a group of dowsers was at Queen’s University in Kingston in the early 80’s when the convention was held in Sterling Hall.  I found it quite humorous that in the foyer of this building is a two story pendulum which is in constant motion.  It was here that I met some of the great people in dowsing such as Bruce Magil, Bernie Urban and others who taught me so much.

When the convention was moved from Kingston I lost contact with this group till I saw an advertisement in the local paper for a group in Kingston finding a well. This lead to the formation of the Kingston Dowsers of which I am still a member. I am also a partner in a dowsing company (Artesian Dowsing Company).

About 2005 I started attending the conference in Toronto and was a member at large on the board in 2008 and 2009.  In the year 2010 I was awarded the dowser of the year award and also elected vice president of the Canadian Society of Dowsers.   I hope to assist others in the way my predecessors have helped me.